The AR Wall virtual set used by both Star Trek: Discovery and Star Trek: Strange New Worlds was featured in an article in American Cinematographer, which showed sets from several shows.

The AR Wall uses “an LED wall, tracked cameras and real-time graphics rendering” and replaces shooting in front of a greenscreen.

Pixomondo constructed one for Discovery and Strange New Worlds. It is a “270-degree, 70’x30′ horseshoe-shaped volume…which can be fed real-time animation from Unreal Engine.”

“In the COVID era, being able to shoot large-scale locations without having to leave the stage is a huge benefit,” said Jason Zimmerman, lead visual-effects supervisor for both Trek series. “The LED wall is fantastic for creating environments, and on Star Trek, of course, traveling to different worlds is something we’re very interested in doing.”

“We’re using Roe’s Black Pearl BP2 2.8mm LED panels for the wall and the Carbon series CB5 5.77mm panels for the ceiling,” said Mahmoud Rahnama, head of studio/VFX supervisor at Pixomondo Toronto. “The ceiling is fully customizable, so we can either take panels out and hang practical lights over the volume, or just use the ceiling’s LEDs for lighting. We have more than sixty OptiTrack motion-capture cameras with the ability to track two cameras — [which are] on Technocranes, Steadicams, dollies and the like — simultaneously.”

“A lot of shows are looking at this as an opportunity to advance filmmaking,” said Zimmerman. “Getting something in-camera on the day is so much better than greenscreen in many ways. One major difference is that the production-design and art departments are a lot more involved much earlier in the process, because they have to get assets ready to be photographed instead of waiting until after the shoot.

“If it weren’t for COVID, I probably would have been in Toronto for a few months helping usher the volume in. Fortunately, our team up there is phenomenal. I’m able to use [Nebtek‘s] QTake [video-assist system] to log in remotely and watch as they’re shooting. If any issues come up, the directors or the executives can reach out, and I can see what they’re talking about.” 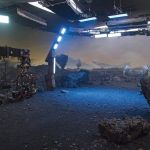