In the Trek world, it’s Captain Picard Day, and in honor of that, Paramount + has released a new teaser for Star Trek: Picard Season Two. (Spoilers below).

From watching the teaser, it appears that the subject of Season Two will be time, and somehow, that time is “broken.”

In addition, fans are treated to the first appearance in Star Trek: Picard of John de Lancie as Q, who says to Picard, “Welcome my friend, to the very end of the road not taken.”

Also appearing in the teaser is Jeri Ryan, without Borg appliances and with what appears to be a wedding ring.

Picard tells his crew that “we can save the future and I will get us home.” 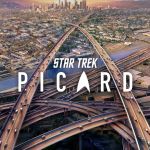 Also released was a new poster, showing Los Angeles with its overlapping highways shaped into a Starfleet Delta. Click on the thumbnail to see the full-sized poster.