Included in each Klingon grand prize package are the following: 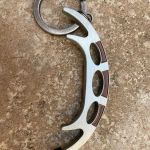 “The Bat’leth No Touch Tool was created exclusively for Star Trek Online. This miniature replica of the Klingon “sword of honor” features a stylus tip to help you fight germs found on standard touch pads and other high-traffic surfaces.

“The Klingon Miracle Worker Cruiser – Klothos Class is a tier 6 ship named after one of the first Klingon vessels outfitted with a cloaking device, also famed for having been captained by Kor – an honored hero of the Empire’s recent past.

There will be one hundred runners up prizes. That prize is a code to unlock the Klingon Personnel Package for Star Trek Online on PC.

The winners will be randomly drawn and winners will be posted on TrekToday‘s FB and Twitter page. Remember that this is for PC players only, and don’t send duplicate entries because all will be removed. Email us here at trektodaygiveaways@gmail.com by Sunday June 2 at 11:59 PM ET and best of luck.

Shatner Vs. Tyson For Coppergel