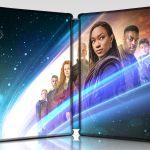 On July 20, Star Trek: Discovery Season 3 will be arriving and fans can now see what the packaging will look like and what is included in the release, as reported by Star Trek.com.

Click on the thumbnail at left for full-sized image.

Here is what is included in the Blu-ray set:

The Blu-ray can be pre-ordered here. The Steelbook link is here, but it is not yet available for pre-order.