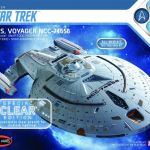 There are two versions of the USS Voyager, one clear (to accommodate lights, which are not included) and one opaque. The ship is 13.4″ long, and includes landing gear, clear sensor dish, clear nacelle parts and windows. The clear version of the ship will be molded in clear plastic.

The USS Excelsior is due out mid-year, according to TrekCore. This is a reissue of a kit with “restored parts.” It will include parts for either the NX-2000 (Star Trek III-era) or for the NCC-2000 (Star Trek VI-era) version ship.

To pre-order the USS Excelsior, which costs $35.99, head to the link located here.