By Simon Hugo and Ben Robinson

It’s here at long last, and you don’t need to be sitting at the edge of a wormhole to experience it. “It” is the Deep Space Nine Illustrated Handbook, out now from Hero Collector, publishing imprint of Eaglemoss, the British company best known for its Star Trek ship models. The Deep Space Nine Illustrated Handbook — by Simon Hugo and Ben Robinson — takes readers aboard both Deep Space 9, the former Cardassian space station once known as Terok Nor, and the U.S.S. Defiant, the station’s Defiant-class starship that Captain Sisko once praised by noting, “She may have flaws, but she has teeth.” The book is the fourth in Hero Collector‘s popular series of Illustrated Handbooks, with previous titles devoted to the U.S.S. Enterprise NCC-1701, U.S.S. Enterprise NCC-1701-D, and the U.S.S. Voyager NCC-74656. 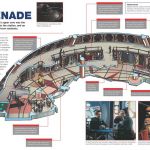 The Deep Space Nine information begins with the refit of Terok Nor, which was the original Cardassian space station. In the rest of Chapter One, which takes up half of the book, fans will find all the details regarding the station, from how it’s powered, to the various departments to be found on the station, to the residential quarters, to the defensive systems on the station.

In addition to the schematics and the photos of the station and the various places inside of the station, fans will enjoy photos from various episodes of Deep Space Nine, and descriptions of the activities on board the station.

As a fan, my personal favorite is the description and layout of the Promenade.

Chapter 2 contains information on the various runabouts seen/used during the seven years of Deep Space Nine. Fans will appreciate the gorgeous photos of the ships.

Chapter 3 is about the Defiant. In addition to the photos, readers will have detailed descriptions of the areas contained within the Defiant, and explanations of weapons and defense systems. Holographic systems on the ship are explained, and details about Main Engineering, the Mess Hall, and Crew Quarters are provided.

The USS Sao Paulo is also covered in this chapter, as well as weapons, and various uniforms and rank insignia.

Next to the Deep Space Nine Companion, this is a must-have book. I wish it had been available when I was writing my story for the Strange New Worlds contest some time back. It’s a treat for fans, and in addition, it’s nice to see Deep Space Nine get some attention.

The Star Trek: Deep Space Nine Illustrated Handbook is available as a hardcover on Amazon. To order, head to the link located here.