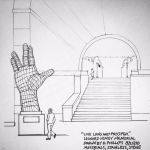 Seventy-seven-year-old Tom Stocker has begun a campaign to have a sculpture commissioned and erected for native son Leonard Nimoy.

The campaign has the approval of the Nimoy family, as well as from William Shatner, who said, that it would be a fitting tribute to the actor.

“The more attention that can be paid to that wonderful man, the better,” said Shatner. “He was like a brother to me. He’s a wonderful citizen of America, but in particular of Boston.”

The sculpture would feature Spock’s “iconic” split-fingered salute, which Nimoy based on a rabbinical blessing that he saw in synagogue.

If commissioned, the sculpture would be created by David Philips, who had a sculpture known as Scrolls in the New England Conservatory earlier this spring. it would stand on a piece of property in Boston’s West End Place.

“As a special tribute,” said Julie Nimoy via Twitter, “a twenty-five foot stainless steel LLAP memorial has been proposed in Boston. It will honor @TheRealNimoy and will be a symbol for peace and tolerance worldwide. Dad would be so happy that his positive message could resonate with people for [years] to come.”

More news on the project can be seen on Nimoy’s Twitter feed, as it becomes available.

Click on photo at top left to see sketch of sculpture.