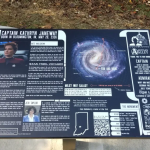 On Saturday, a Captain Kathryn Janeway statue was unveiled in Janeway’s hometown of Bloomington, Indiana.

Due to COVID-19, Kate Mulgrew appeared virtually, saying that “It is a great privilege to have played her and to know of her great resonance in the world today.”

Peter Kaczmarczyk of the Captain Janeway Bloomington Collective had this to say; ““I love my Trek but Captain Janeway is so much more than just a great character among the Trek pantheon. People locally recognize this, and the broadening of the appeal has helped us every step of the way and it plays a big part in the interest and excitement we see. We have our share of Trek nerds but we have a lot more people who respect and honor who Captain Janeway is and what she represents.

“From the very beginning we stressed that this wasn’t just about a Star Trek character; it was about Captain Janeway the role model, the inspiration, the leader who young girls and women could, and still can, look up to.”

“Hearing you all speak today is deeply moving to me,” said Mulgrew. “To realize that Janeway has had such an important role in your lives, and I think, in cultural history, is not only terribly affecting to me, but makes me want to go forth in a new way, and I am doing that, I think, with [Star Trek:] Prodigy.”

Click on thumbnail at left to see the plaque accompanying the Janeway statue.

What do you think? Chat with other fans in the Star Trek: Voyager forum at The Trek BBS.