Star Trek: Discovery: News And A Trailer And A Cat

Plenty of news broke while your reporter was away on vacation, and in this article, it’s time to catch up on Star Trek: Discovery.

From TrekCore, we get word of a new trailer for Season Three of Star Trek: Discovery, as seen below. Pay special attention to new Trill character Gray (Ian Alexander), and Saru’s uniform.

There is also a new poster and a new logo. Click on the thumbnail below to see the poster. The logo will be in the main picture that accompanies this article. 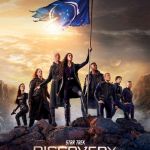 From TrekMovie comes news from the panel which featured Sonequa Martin-Green, Alex Kurtzman, Michelle Paradise, and David Ajala. Here is what fans can expect:

Kurtzman: “Obviously, the Federation is not where it was, and yet our characters enter into this timeline and our whole season is about trying to bring it back. So you are into a world where it is very reflective of the world we live in now. And I believe very reflective or [Gene] Roddenberry‘s essential vision of optimism. In the darkest times we have to hold that beacon of light up to guide us back.

Paradise: “At the top of the season part of it is a mystery that Burnham needs to figure out. Where is the Federation? What kind of state is it in? And that’s something that she and then our heroes on Discovery also need to figure out. And when we find it, we’ll find that it’s still in existence. It’s just much diminished from what it was. They’re very much kind of in survival mode.”

Ajala: “I think the main thing about this character [Cleveland ‘Book” Booker] that was special was his sense of purpose. And to find a sense of purpose that was bigger than himself allowed him to continue living life was a backstory that I discussed with Michelle and Alex. He is going to bring out something in Michael Burnham. And Michael Burnham will do exactly the same thing for him.”

Paradise: Book is “someone who was born into this new world that we come into. So while our heroes have the perspective of nine hundred-and-thirty years ago when the Federation what was strong and everyone knew what it was, he comes from this time that’s very, very different. And so actually Book becomes a window into this new world for us. He becomes kind of the eyes through which we see the everyday present for those who were born into this new future. And our heroes coming in with a completely different perspective, it’s a really helpful way to make that jump to the future is to have that anchor for us in what David does with that character.”

Fans will also learn more about the Trill, in the person of Gray (Alexander).

Finally, not all is doom and gloom. Star Trek: Discovery has a new addition to the show, Grudge, played by Leeu, who is Cleveland “Book” Booker’s pet. Grudge is “feisty,” said Ajala. “She is cynical, cautious, and wary of people. But when she embraces you and it takes you in, she takes you in. It’s tough love! I’ve had to work my way up the ladder.”

Grudge is a Maine Coon Cat.