IDW Publishing‘s Star Trek: Deep Space Nine: Too Long A Sacrifice #2 comic arrives tomorrow, but fans can have a sneak peek at the issue today.

In Too Long A Sacrifice #2, “With the murderer still on the loose, the inhabitants of Deep Space 9 are starting to divide into factions, made even worse when the Ferengi government gets involved. To make matters worse, conflict between Constable Odo and the Federation’s hand-picked criminal investigator threatens to derail the investigation itself! The DS9 murder mystery continues.”

Written by Scott and David Tipton, and featuring art by Greg Scott and covers by Ricardo Drumond, the thirty-two page issue will sell for $3.99. 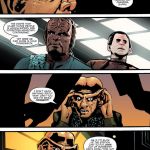 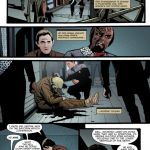 Topics: Too Long a Sacrifice