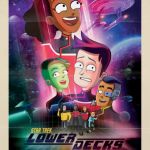 A new trailer for Star Trek: Lower Decks has been released with only three weeks to go until the show makes its debut on CBS All Access. Plus: New Lower Decks poster. (Click on the thumbnail at left to see full-sized poster.)

Star Trek: Lower Decks is a “new half-hour animated comedy series, focuses on the support crew serving on one of Starfleet’s least important ships, the U.S.S. Cerritos, in 2380. Ensigns Mariner, Boimler, Rutherford and Tendi have to keep up with their duties and their social lives, often while the ship is being rocked by a multitude of sci-fi anomalies.”

This is not going to be your average Star Trek show, if the trailer is any indication.

Star Trek: Lower Decks airs beginning August 6 in both the U.S. and Canada. In Canada, the show can be seen on Crave and the CTV-Sci-Fi Channel.

Note: This trailer only works in the U.S.