In an interview with Entertainment Weekly, Writer Mike McMahan spoke about Star Trek: Lower Decks, and what fans can expect from the show. Plus – Next Generation characters on Lower Decks?

Although Star Trek: Lower Decks is animated, it’s aimed at adults, not children. “It’s definitely not a kids’ show, but only because it’s a little bit more complex than a kid show would be,” said McMahan. “The fun of Rick and Morty is that it breaks down sci-fi tropes and is told through Rick Sanchez, who has a very specific, chaotic, nihilistic lens.

“It’s treating them as important for everybody on the starship as it would be in a regular Star Trek show.”

Lower Decks is a different kind of Star Trek, as its focus is not on the captain and senior officers, but on the junior officers. McMahon explained how that would affect the types of stories that fans will see. “The big stories are happening in the bridge crew and there’s more kind of social-emotional stories happening to the ‘Lower Deckers.’ So, it’s like their job, and the world they’re in get affected by these sci-fi stories.

“But the funny thing too is that whatever menial job you have to do in Star Trek, it might be something that they do every day, but it’s still sort of a fascinating look into stuff that happens onboard that haven’t been highlighted in another series.

“So instead of being on the turbolift — the elevators in Trek — our guys are repairing the turbolift. We also spend a lot of time in the bar. You’ll also see the ‘Lower Deckers’ go on away missions doing things that the bridge crew doesn’t have to deal with.”

McMahan shared a little about what to expect from Captain Freeman (Dawnn Lewis) and how the relationship between a captain and junior officers and crew is different than that of the relationship between a captain and senior officers. “She is sort of trying to do this balancing act that all captains do, where they demand respect and are admired and trusted by the crew, but then they also kind of have to be the bad guy,” said McMahan.

Finally, since Lower Decks is set during the Next Generation time period, will we see any familiar characters from that series? “There are a lot of recognizable characters in the galaxy at that point,” said McMahan. “Next Gen is my favorite era. And as a huge Trek fan, I would definitely want to try to use some of them so that I could not only build out the world, but also work with some of my heroes. But I can’t get more specific than that. You’ll have to wait and see.” 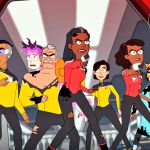 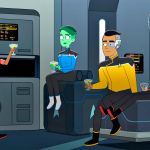