Several new Star Trek books coming out this year will be of interest to Trek fans. 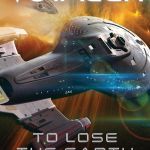 First – a cover has been released for Kirsten Beyer‘s tenth book in the Voyager relaunch series of novels, To Lose the Earth, which is due out in October. (Click on thumbnail at left.)

In To Lose the Earth, “As the crew of the Full Circle fleet works to determine the fate of their lost ship, the Galen, a struggle for survival begins at the far edge of the galaxy. New revelations about Species 001, the race that built the biodomes that first drew the fleet to investigate planet DK-1116, force Admiral Kathryn Janeway to risk everything to learn the truth.”

Also due out in October is Mr. Spock’s Little Book of Mindfulness by Glenn Dakin.

The blurb for this book is as follows: “In a universe that seems to have gone mad, we turn to mindfulness to restore sanity. And who better to teach us wisdom than Mr. Spock, that beacon of calm, rational thought. With quotes from Star Trek and timely insights about modern life this book will be your guide. When humanity has lost its way, it takes a Vulcan to raise an eyebrow at our folly and lead us towards the truth. After all, it’s only logical…”

Coming in November is The Wisdom of Picard: An Official Star Trek Collection by Chip Carter.

Here is a description of The Wisdom of Picard: “Discover all of Captain Jean-Luc Picard’s sage advice, insight, and wisdom from the deck of the USS Enterprise and beyond in this ultimate collection of wise words from the esteemed Starfleet captain.

“Any Star Trek fan knows that Captain Jean-Luc Picard is renowned for his impressive oratory skills, preferring negotiation and diplomacy over violence and destruction. Now, you can finally ponder all of his wisdom in one place—from his thoughts on leadership and sense of duty to justice and the limitlessness of exploration—in The Wisdom of Picard.

Journey with the Starfleet captain through his seven seasons on Star Trek: The Next Generation to the Star Trek movies to the current series Star Trek: Picard. The Wisdom of Picard boldly goes where no book has gone before to log Picard’s timeless advice in one impressive collection, perfect for Star Trek fans everywhere! Make it so!”

Also due out in November from Eaglemoss by Glenn Dakin is Star Trek Cocktails.

In Star Trek Cocktails, “Set your taste-buds to stunned! These Cosmic recipes will take you where no one has gone before. They’re cocktails, Jim, but not as you know them…

“Have you ever longed for a taste of Romulan Ale? Or pined for the mellowing effect of Dr McCoy’s Mint Julep? Perhaps a Fuzzy Tribble would get you purring? Or a soothing sip of Captain Picard’s Earl Grey Martini? This voyage into the future of stylish drinking is a must for all Star Trek – and cocktail – fans. With a galaxy of illustrations, and a witty garnish of quotations, this book will help you celebrate your favorite show.”