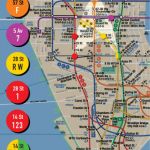 Here are the subway stations where you can get your card(s):

At the Union Square stop, there will be posters and “other branding within the station.”

If you get there between 10 A.M. and 8 P.M., “brand ambassadors” will be on hand to give out Picard posters to fans “who post selfies with the insignia using the #PicardDelta hashtag on social media.

In the picture next to the first paragraph of this article (click the thumbnail), check out the delta insignia. It was formed by linking the six stations listed above as places to purchase the cards.