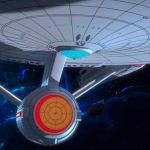 The Girl Who Made the Stars is about the legend that Michael Burnham explained in Star Trek: Discovery: Brother. “A thousand centuries ago in Africa. The /Xam Abathwa tribe gathered to share a story. The tale of a girl who dug her hands in the wood ash and threw it into the sky to create the Milky Way. And hidden there, a secret buried among the eternal stars, was a message. An enormous letter in a bottle made of space and time, visible only to those whose hearts were open enough to receive it.”

The episodes will air on Thursday, December 12.

Thanks to TrekMovie for the photos taken from the preview. Click on the photo of the USS Enterprise to see the full-sized photo.

Topics: Ephraim and Dot, The Girl Who Made The Stars