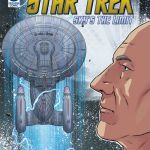 With the holidays fast approaching, a gift for that Next Generation fan on your list is the Star Trek: Picard: Movie & TV Collection Blu-ray set.

The set contains six discs. On the discs ares two double episodes and the four Star Trek: The Next Generation movies. In addition, fans will receive a sixteen-page Star Trek: Sky’s the Limit mini-comic from IDW Publishing, which features a brand-new story.

The full contents can be found in the article posted here earlier in the year.

Some might argue that the Inner Light should have been on here too but if one goes down that road, they’d need more discs!

The specials on the set are numerous and include commentaries, stories, promos, art and storyboards, discussions, and that brand-new comic.

Both the case and the slipcover have listings of the contents of each disk.

Nothing is brand-new here other than the comic, but it’s a great set to give to a casual fan who likes Picard and The Next Generation, but doesn’t own all of the seasons and movies on DVD or Blu-ray.

Those waiting for Star Trek: Picard to air will of course be interested in the mini-comic from IDW Publishing.