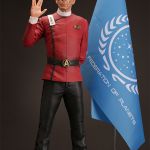 For those original series fans with deep pockets, Darkside Collectibles Studio has something for you, the Leonard Nimoy as Captain Spock 1/3 scale museum statue. This is the first in a new series of Captains of the USS Enterprise.

Here is the description of the Spock statue: “Recreated from, original CBS Studio Inc, archived materials and through thorough examination of the original filming costumes the statue Features a breathtaking likeness of actor Leonard Nimoy as Captain Spock of the U.S.S. Enterprise as he appears in the Paramount Pictures Star Trek II: The Wrath of Khan film directed by Nicholas Meyer in 1982.

“Leonard Nimoy is posed in the official Starfleet salutation, measures 65.5 cm (25.79 inches) and is presented in authentically sculpted in detail captain’s costume. The statue captures the noble feeling and character of Spock and is accompanied with the United Federation of Planets flag.

“Chiseled in top quality polystone resin, featuring life like skin details, each unit is hand crafted to meet the highest collector’s standards. Every statue is strictly limited in the number produced and sold to enhance its value and protect your investment.

Some pictures of the statue can be seen below. Note that this is a prototype so “product details could be subjected to change without further notice.”

The Spock statue can be pre-ordered here. The cost, which includes VAT tax, will be $1,449.42. Payment plans are available.

Takei To Receive Award Next February