A new Star Trek: Short Treks will drop in the U.S. and Canada on Thursday, and TrekToday has a preview for fans. 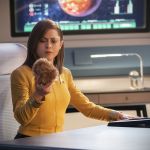 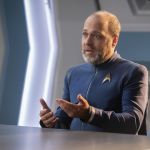 In The Trouble With Edward, “Newly-minted Captain Lynne Lucero (Rosa Salazar) is excited to take command of the U.S.S. Cabot, until she meets Edward Larkin (H. Jon Benjamin), an ornery scientist who believes he has found a revolutionary new use for tribbles.”

Also appearing in the episode is Anson Mount as Captain Pike.

The Trouble With Edward will air on CBS All Access and on Crave TV.

Topics: The Trouble With Edward

More Preview Photos From The Trouble With Edward