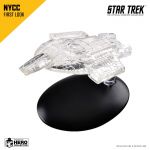 Ships available for purchase include the Reman Scimitar, which “makes its debut at NYCC and joins the collection as the latest Special Edition. Other new additions to the oversized XL Editions will also be on display and for sale, including the U.S.S. Excelsior NCC-2000 – not to mention the fan-favorite Star Trek: Discovery: The Official Starships Collection and the U.S.S. Discovery NCC-1031 herself.”

There will be a special event outside of the convention at Barnes & Noble Union Square where Hero Collector‘s Ben Robinson will appear with Star Trek designer Todd Cherniawsky for a special Q&A discussion. This discussion will be followed by a signing. This is a “ticketed event, and each attendee will receive a special goodie bag courtesy of Eaglemoss Hero Collector.” 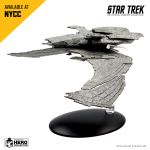