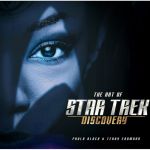 The books include The Art of Star Trek: Discovery, Star Trek: Voyager: A Celebration, The Autobiography of Kathryn Janeway, and Star Trek: The Artistry of Dan Curry.

The Art of Star Trek: Discovery, written by Paula Block and Terry Erdman, “explores behind the scenes of the hit show, with cast and crew interviews, set photography, concept art and storyboards. With exclusive content from the first two seasons, this book is a must-have for every Star Trek fan.”

Expect The Art of Star Trek: Discovery in April of 2020. Click on the thumbnail above to see a larger-sized photo of the cover art.

In June 2020, Star Trek: Voyager: A Celebration, will surely please Star Trek: Voyager fans. Written by Ben Robinson (Hero Collector), the book was “pitched as the greatest [Trek] convention ever in a book [form].” Note that the cover art for this is only a “placeholder” for the final art.

More Voyager is due out in 2020 with The Autobiography of Kathryn Janeway, which will arrive in July 2020. Written by Una McCormack, “we get to hear the story of one of Starfleet’s greatest captain in her own words.

“We’ll hear her side of the story about how she and her crew traveled further than any human ever had before, stranded decades from home while encountering new worlds and species. Explore how she brought together Starfleet and the Maquis as part of her crew, forged new alliances with species across the galaxy and overcame one of Starfleet’s greatest threats – the Borg – on their own remote and hostile territory.

“And, we’ll get Janeway’s personal take on key characters such as Seven of Nine, her trusted friend Tuvok, new arrivals like Neelix and her second-in-command, Chakotay.”

In September 2020, look for Star Trek: The Artistry of Dan Curry, written by Curry and Ben Robinson.

In Star Trek: The Artistry of Dan Curry, “In fifty years of Trek history, seven-time Emmy award winner Curry is one of the franchise’s most enduring talents. His contributions have ranged from directing, title design and concept art, to practical on-set effects and weapon design.

“From The Next Generation to Enterprise, Curry’s incredibly diverse Star Trek work has resulted in some of the series’ most memorable moments. The book reveals the many and varied techniques used to produce some of the most spectacular visual effects used in the various series, while Curry also goes in-depth to divulge the secrets of some of his own personal favorite creations.

“The book includes photos and illustrations from Dan’s personal collection, along with contributions from various Star Trek cast members including Michael Dorn and Scott Bakula.”