Today at San Diego Comic-Con, descriptions of the new characters in Star Trek: Picard were released along with five new photos from the show.

TrekCore and CBS All Access provided the show and character information that follows. There WILL be spoilers.

Jean-Luc Picard is retired, but not happy about it. “Retirement is not what he was looking for, not what he wanted,” said Sir Patrick Stewart. “It was an impulsive act that put him in this situation and he has regretted it and lived with a certain amount of guilt about it for many years…and that’s where we pick up the show.”

The first picture features Jeri Ryan as Seven of Nine.

Stewart, Evagora, Santiago Cabrera (Rios), and Michelle Hurd (Raffi) can be seen in the third picture.

In the fifth picture, Stewart and Isa Briones (Dahj) are face-to-face. 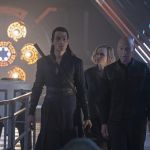 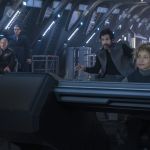 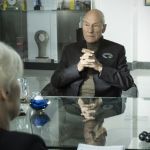 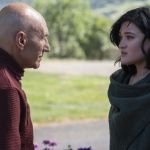 Isa Briones plays Dahj, who “seeks out the retired Picard for answers after facing a ‘big event’ in her life.”

Eva Evagora is Elnor, “a young Romulan of seventeen who is an ‘expert and hand to hand combat” and is “‘fiercely loyal to Jean-Luc Picard.”

Alison Pill is Dr. Agnes Jurati, “a researcher, and someone ‘who’s confused with her place in the world.'”

Santiago Cabrero is Cristobal “Chris” Rios, “a former Starfleet officer and pilot who at first is reluctant to help Picard.” He has “demons of his own.”

Michelle Hurd is Raffi Musiker “a character who knows Picard from some time in their shared past.” She is a “genius strategist” who is “haunted by a demon.”

Harry Treadaway is Narek, a Romulan who is “involved in some secret operation.”

CBS All Access on Instagram has released a short video where the new additions introduce themselves and give a brief description of their characters. You can watch it here.