FanSets has announced Star Trek pins that will be available at this year’s San Diego Comic Con and a special pin for Star Trek Las Vegas in August.

A Starfleet Headquarters visitor’s badge pin will be available for those who “visit and complete the Star Trek Transporter experience on the show floor.” 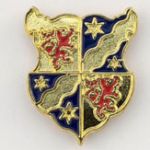 At the “Jean-Luc Picard: The First Duty museum experience at Michael J. Wolf Fine Arts, fans can get an exclusive replica pin of the Picard family crest as seen in Star Trek: Picard.”

On Saturday afternoon and Sunday, “a limited quality of pins featuring the debut of two characters from” Star Trek: Lower Decks will be available at the Star Trek booth.

When it comes to the next big convention, Star Trek: Las Vegas, look for an exclusive pin limited to a run of only one hundred. In honor of the last appearance of Nichelle Nichols at STLV, FanSets will be offering an exclusive pin featuring her as Uhura. 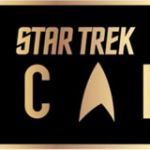 Another FanSets pin set to debut at STLV will be FanSets’ first Star Trek: Picard pin. This pin will be sold at STLV and will also be available on FanSets’ website after STLV. Click the thumbnail to see this pin.

The Women of Trek collection for 2019 has also been unveiled by FanSets. When the pricing and availability information is launched (later today according to FanSets), a separate article on the set will be posted. For now, enjoy the thumbnail below. 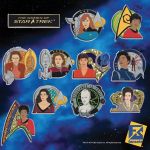