Once again, it appears that some of Star Trek: Discovery will be filmed in a foreign country. 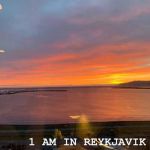 One of the photos shows how bright it was at 1 AM in Reykjavik, which gets almost twenty-one hours of sunlight at this time of the year.

Back in February, Tamara Deverell, production designer for Star Trek: Discovery, said this: “[We] looked into going to places like Iceland and Scotland for other planets—that might be in the future for Star Trek.”

It will be interesting to watch next season and look for scenes set in Iceland, if they are indeed filming there.