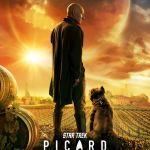 Today, the key art for Star Trek: Picard was released by CBS All Access.

The art features Jean-Luc Picard on an alien planet, with another moon or planet in the sky. Picard is standing in a vineyard, with several casks of wine nearby. And he appears to have acquired a pit bull dog.

Click on the thumbnail to see the full-sized photo.

The dog’s name, according to the dog tag, which is shaped like a Starfleet emblem, appears to be No. 1.

Those attending San Diego Comic-Con later this month will be able to see Stewart and the other actors on a panel on Saturday, July 20, from 11:30 AM to 1 PM. They will appear along with other Trek actors in the Enter the Star Trek Universe panel.

Follow Picard into the next chapter of his life. #StarTrekPicard. We spy a furry friend ? Star Trek: Picard to stream exclusively on @cbsallaccess in the United States, on Amazon #PrimeVideo in more than 200 countries & territories and in Canada on Bell Media’s @spacechannel & OTT service Crave.

Mack To Be Consultant For Trek Animated Series