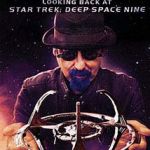 Located at booth #4118, Shout! Factory will offer twelve Comic Con exclusives including a Deep Space: What We Left Behind Special Edition Blu-ray which includes a collectible, two-sided 11 x 17 poster. The set will sell for $30.00.

IDW Publishing has also announced its Comic Con exclusives, and there are two items of interest for Star Trek fans. The first item is a “Greg Hildebrandt ‘negative art’ rendition of his classic (and only) Star Trek painted cover.” This Star Trek Year Five #1 Hildebrandt Negative Convention Variant will sell for $10.00.

The second IDW Publishing offering is a Star Trek vs. Transformers TP Animated Art Convention Variant. The “variant trade paperback has an ‘animated cell art style’ cover by artist Derek Charm,” and it will sell for $20.00.

Paramount Back In For UK Amusement Park