Cruz And Other LGBTQ Celebrities On Being Gay

Six LGBTQ celebrities sat with Entertainment Weekly and spoke about coming out and being gay in Hollywood. 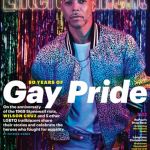 Amongst those celebrities was Wilson Cruz, who plays Dr. Hugh Culber on Star Trek: Discovery.

In a studio in Manhattan transformed into the Stonewall Inn, where the 1969 gay riots led directly to the gay liberation movement; the actors, directors and news anchor acknowledged the importance of the iconic inn.

“I think it’s important, in light of recent progress, to remember how we got here and that there was a time when this wasn’t possible,” said Cruz; “that you couldn’t walk down the street in major cities holding your partner’s hand and being your entire self.”

CNN News Anchor Anderson Cooper pointed out that it was still rare to “see a man and a man or a woman and a woman holding hands walking down the street.

“Maybe you see it in gay neighborhoods, but I travel around the country all the time, and I can tell you, you don’t see it in airports, even in New York.”

When asked what had originally given them the hope that they could live their life the way they wanted to live, Cruz said that “…For me, there really was no one. I combed the magazines and searched for someone that I could relate to, and it wasn’t until I read James Baldwin‘s Giovanni’s Room, in my bedroom, by myself, that I understood that I could be a gay person of color who was smart and fierce and could write. He gave me permission to be me. And he was long gone by then.”

For Neil Patrick Harris (How I Met Your Mother),”it was Ellen [Degeneres‘] coming out and the magazine cover that said, ‘Yep, I’m Gay.‘ I thought that was really amazing. I liked the ‘Yep’ in it. It seemed relatively inconsequential. It didn’t seem like big news, even though it was the cover of this magazine. And now, look at what she’s done. She’s been accepted almost uniformly and been able to create great positive change in so many ways, daily.”

For Cruz, coming out publicly was due to his role on a television show. “I was twenty years old when I did My So-Called Life,” he said, “and I was playing the first gay teenager [series regular] on primetime TV. “And so it was not lost on me, the responsibility that came with that. I literally came out to my parents because of My So-Called Life, because I knew I was gonna come out publicly and I was like, ‘Well, I should probably tell them first.’ But it was a conscious choice.”

Being gay “changed the trajectory” of Cruz’s career. “When I came out in the mid-’90s, I think there was a hunger to tell LGBT stories, but there was a lack of people willing to play those roles. And so, after My So-Called Life was canceled, people started to call me because they knew I was not only willing but excited to play them.”

What We Left Behind Documentary Headed Down Under