Mego is releasing its newest wave of action figures and they include three Star Trek characters. 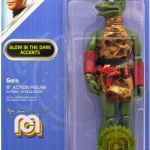 The set of three eight-inch-tall figures will sell for $41.99 and is expected in July. To pre-order the set, head to the link located here.

Click on the thumbnail to see the full-sized Gorn in its package.