The photos show Sir Patrick Stewart, and plenty of people in Star Trek uniforms including a few aliens.

And speaking of Star Trek: Picard,  Pittsburgh Post-Gazette TV critic Rob Owen made a comment on the picture that was released yesterday of Stewart as Picard. “Hmmm @CBS upfront had a clip (or probably something made just for upfront) of Star Trek: Picard (what they called it) with a Starfleet officer asking Jean-Luc, ‘May I have your name, please, sir?’ as Picard appears incredulous.” 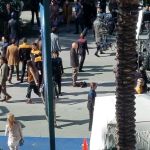 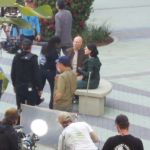