“The Museum of Science Fiction and the National Aeronautics and Space Administration (NASA) have partnered to bring Escape Velocity 2019 back to Washington, D.C. for the fourth year. The event takes place Memorial Day weekend, Friday through Sunday, May 24 through 26 at the Marriott Gaylord National Resort and Convention Center in National Harbor.

“This futuristic world’s fair promotes Science, Technology, Engineering, Arts and Math Education (STEAM) through science fiction and popular culture, fostering fun and fascination through a series of panels, exhibitions, demonstrations and screenings. Escape Velocity 2019 is designed to attract and engage young people by bringing together industry thought-provokers and sci-fi icons to discuss the most compelling, entertaining and educational opportunities for scientific expansion in the world today.

“New this year is the inaugural Beyond Reality VR tournament. Open to all conference attendees, Beyond Reality enlists participants in a virtual-reality, galactic battle. Players compete to win the grand prize – a brand new Oculus Quest VR headset – sponsored by Balti Virtual. 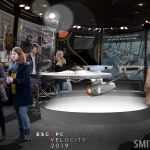 “Additional featured attractions include a full-scale replica of the USS Enterprise from Star Trek: The Motion Picture, the Galactic Championship for Cosmic Encounters Tournament and the science fiction prop replica construction competition. Plus, the event will feature a panel of Star Wars experts discussing the controversy of Han Solo shooting first, taking down the bounty hunter Greedo in the original George Lucas Star Wars film.”

“Escape Velocity features a variety of programming throughout the open hours of the show. Friday sessions run from 10:00 a.m. until past Midnight; Saturday show hours start at 9:00 a.m. and conclude with a midnight film showing of Plan Nine from Outer Space and Sunday runs from 9:00 a.m. until 4:00 p.m. For a full schedule of hours and events, please visit Escape Velocity Programs and hours.

“Three-day weekend pass tickets, priced $30.00 for youths (aged 11-16), $50.00 for adults and $100.00 for the full VIP treatment, are available through the Escape Velocity website or onsite at the Gaylord Convention Center. Ten dollar ‘Pay It Forward’ tickets allow patrons to donate a single-day admission for an under-served youth in the Washington, D.C. metro area.”

For more information, head to the link located here.

Osunsanmi: Behind The Scenes Of Discovery's Season Two Finale