Fans of the original series and of Star Trek: The Next Generation will be pleased to hear the news that Bye Bye, Robot has released three new limited edition Star Trek art prints.

The prints come courtesy of Cliff Cramp, who has created the new designs. 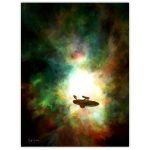 From the original series comes Five Year Mission. “Featuring tones of emerald, gold, and terra cotta,” the 18″x24″ print is a hand-numbered limited edition of seventy-five copies. “The play of dark and light around the traveling U.S.S. Enterprise brings to mind everything that is yet to come for the crew of the original series.” 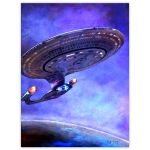 There are two prints from Star Trek: The Next Generation. First up is Where No One Has Gone Before. “Showcasing tones of lavender, steel, and blue,” this 18″x24″ print is also hand-numbered and is a limited edition of seventy-five copies. “The vantage point of the U.S.S. Enterprise against the planetscape and vivid surround of space gives a sense of anticipation for the adventures awaiting the Next Generation crew.” 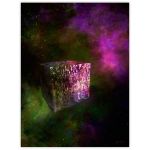 The second The Next Generation print is Resistance Is Futile. This “third image, highlighting tones of olive, fuchsia, and bronze,” is also 18″x24″ and is also a hand-numbered limited edition of seventy-five copies. “This foreboding image serves to represent the challenges and obstacles faced, and ultimately overcome by the enduring crews of all Federation ships.”

Each print is made of heavyweight 10pt acid-free cardstock. The cost for each print, which can be ordered here, is $45.00 a print.

Fans who want all three of the prints and purchase them as a set will also receive a special free gift. “In addition to the full set of three prints, a 6×9 autograph card, hand-signed by the artist, will accompany your purchase. This card depicts a beautiful nebula (also painted by the artist, Cliff Cramp) and contains the following information: the artist’s name, short bio, the print release date, the titles of these three paintings, the collectors’ personally purchased limited edition numbers hand-written, and the artist’s hand-signed autograph. But don’t wait too long; these sets will only be available as long as there is one of each print left. As soon as one print sells out, the sets will be sold out too.”