Mego will be releasing fourteen-inch Star Trek figures, and some pictures of the first four figures have been released. They can be seen courtesy of The Trek Collective. Note that the figures, seen at the New York Toy Fair, are “not final.”

The four figures will be Kirk, Spock, a redshirt security guard, and a Gorn.

Click on thumbnails to see larger images, which come from Mego Museum and Toy Ark. 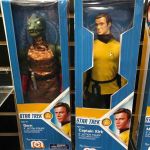 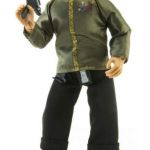 In addition, “wave four” of the eight-inch Trek figures will debut next month. In this release, fans will be able to get their hands on Kirk and Spock in dress uniform, Uhura, and a Romulan Commander variant.

Click on thumbnails for these images too, which come courtesy of Big Bad Toy Store. More images can be found at the referring site. 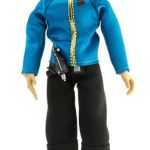 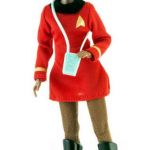 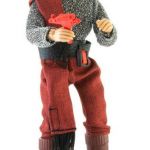