Behind The Scenes Of Point Of Light With Osunsanmi

Producer-Director Olatunde Osunsanmi gives fans a peek behind-the-scenes at the Point of Light episode. Note: Spoilers below for Point of Light.

Osunsanmi was delighted when he got the script for Point of Light. “I got the script for what I call Discovery Episode 203, a/k/a Point of Light, and rang the writer Andrew Colville to congratulate him on writing a heck of an episode. It had a lot going on! Klingons…with hair. The first on-screen introduction of a Klingon baby. The interior of a Klingon house. Georgiou’s return to the series. Characters dying…or not dying. The introduction of Leland and a brand-new Section 31 ship. All of this on the superstructure of a tremendously emotional episode. And I got to direct it. I couldn’t wait to get started.”

After reading the script and getting started, Osunsanmi scouted the stage for the scene where Burnham and Amanda were walking in the hallway, the transporter room – now the transporter room for the USS Hiawatha – which needed to be transformed back, the bridge, attended a scheduling meeting, was present at a prosthetic test, and got a surprise cake.

Other photos included ones taken in the Klingon nursery, including a House Mokai stained glass window.

The actors on Discovery are a friendly bunch. “Sometimes, actors prefer to hang out in trailers between setups and scenes, but not Sonequa and the rest of the team,” said Osunsanmi. “hey prefer to be close, hours on end. It’s remarkable, and it really helps out production, because moving twenty people in and out of an area can be quite the task for the A.Ds.”

Click below to see select full-sized photos. More photos and comments on them from Osunsanmi can be seen at StarTrek.com. 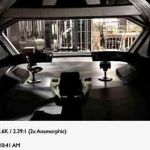 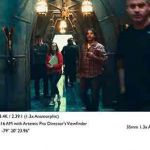 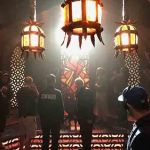 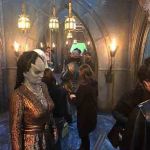 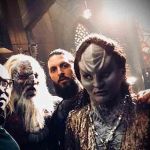 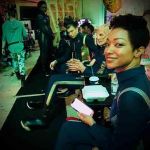