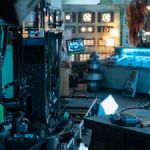 Fans of Harry Mudd will be pleased to see tonight’s Star Trek: Short Treks as the episode, The Escape Artist, features Rainn Wilson as Mudd.

Wilson spoke with io9 and Star Trek.com about the episode, in which he both acted and directed. There are mild spoilers below.

“I had been in discussions with the Discovery gang about coming back and doing more Harry Mudd and then this short just fell into my lap,” said Wilson. “I read it and I was like, ‘This is brilliant. This is absolutely hysterical and strange and exciting.’ And then they offered to have me direct it as well. So, I was thrilled at the opportunity. It was an incredible learning opportunity.” 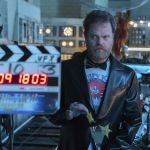 Wilson had directed shows before, notably The Office, on which he played Dwight Schrute. “This was a tricky one to direct — much trickier than The Office. The Office, you know, it’s essentially the same every episode. There’s a few little tricky parts to every episode, but it’s two cameras and they’re sort of swiveling around, capturing behavior. And you just decide, ‘do we want to put the cameras on this side of the desk? Or this side of the desk?’ You know? And that’s basically it. And it was a great warm-up in the directing, because you have production meetings and you have to make directors decisions and work with the actors.

“But…this one was way more challenging. I mean, it’s different alien species and laser beams and beaming up and visual effects and androids, and all kinds of crazy visuals demanding directorial decisions that you had to make. So, I was very intimidated by that and put a lot of work into it. They allowed me to hire a storyboard artist, so I got it kind of storyboarded out. It was an incredible learning experience. That’s how I viewed it, first and foremost.” 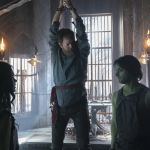 Working with the storyboard artist was “amazing,” said Wilson. “That really helped me see, visually, how this was going to work. For instance, half the episode is set in the Tellarite ship. How do I make that interesting? How do I shoot each scene? We keep coming back to it and leaving it and coming back to it, and it’s got to feel different and visually arresting and interesting. That was a great opportunity.”

Acting and also directing a show can be challenging. “One of the tricky things is always acting and directing at the same time, because you have to call ‘Cut,’ and then you have to run over to a little monitor and watch the last take and watch your performance and make sure it’s fitting in with everyone else’s performances. But you’re also keeping an eye on everything else, like where the camera is, how tight the frame is, and you’re thinking, ‘Is everything happening in the right order? Are we telling the story that we need to tell?’ It’s incredibly challenging being on both sides of the camera, but boy, it sure is fun. Fortunately, like you said, I’d played Mudd a couple of times, so I really knew the character pretty well, and I kind of know how I wanted to play him.”

The Escape Artist airs tonight on CBS All Access at 9:30 PM EST. 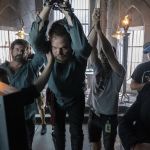 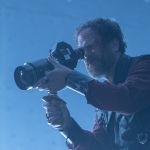 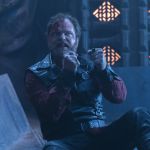