Sirtis: Back To The U.K. For A New Project

Star Trek: The Next Generation‘s Marina Sirtis went from Los Angeles to Bridlington, U.K. (Yorkshire) to take on a role in the pantomime production of Jack and the Beanstalk.

Sirtis, who will be away from home for three months, is taking on the role of the Empathic Fairy.

“This is only my fourth pantomime,” she said. “In the mid ’80s, I was in Snow White in Doncaster, but I didn’t do any more until about five years ago.

“People think that because I live in America, I wouldn’t be interested in doing panto, but I really am,” Sirtis added. 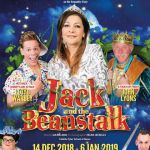 “The people here are so friendly. It is very different to London. I went into a shop the other days for a few bits but I was in there ages because everybody is talking.”

Jack and the Beanstalk runs through January 6 at Bridlington Spa.

“Come and see it,” said Sirtis. “We have got some really talented people in the show.”