In the video, Martin-Green expresses her delight at returning for a new season. The video also shows some filming, and the actors interacting in-between shots. 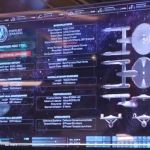 We get a look at Spock’s quarters in the video, as well as some scenes from last season. There is also a display behind Martin-Green in one scene showing the status of the USS Enterprise, which is in distress. Click on thumbnail to see larger-sized photo.

Sirtis: Back To The U.K. For A New Project