It’s well-known to sci-fi fans that many people working at NASA are Star Trek fans, so it’s not surprising that one space image they found recently reminded them of the USS Enterprise.

The Chandra X-ray Observatory team found and shared an image of a galaxy cluster collision using an x-ray telescope. A galaxy cluster is a collection of many galaxies, and contains “hundreds or even thousands of galaxies.” 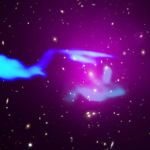 The galaxy cluster in question is named Abell 1033, and includes: x-rays from Chandra (in purple); radio emission from LOFAR, a Dutch Low-Frequency Array; and optical emission from the Sloan Digital Sky Survey. The cluster, which features two galaxy clusters colliding with each other, is located approximately 1.6 billion light years from Earth in the northern constellation of Leo Minor. 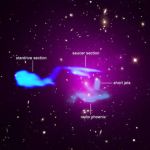 The resemblance to the Enterprise was described this way: “A detailed study of the image shows that the energy of the electrons in the ‘saucer section’ and neck of the starship-shaped radio emission in Abell 1033 is higher than that found in the stardrive section towards the lower left (see labels). This suggests that the electrons have been re–energized, presumably when the jets interact with turbulence or shock waves in the hot gas. The energetic electrons producing the radio emission will normally lose substantial amounts of energy over tens to hundreds of millions of years as they radiate. The radio emission would then become undetectable. However, the vastly extended radio emission observed in Abell 1033, extending over about five hundred thousand light years, implies that energetic electrons are present in larger quantities and with higher energies than previously thought. One idea is that the electrons have been given a further boost in energy by extra bouts of shocks and turbulence.

“Other sources of radio emission in the image besides the starship-shaped object are the shorter jets from another galaxy (labeled ‘short jets’) and a ‘radio phoenix’ consisting of a cloud of electrons that faded in radio emission but was then re-energized when shock waves compressed the cloud.”

Click on thumbnails above to have a look at the photos of Abell 1033.