Today, a new teaser poster was released by CBS All Access for the second season of Star Trek: Discovery. Plus – a start date was also announced. 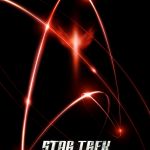 On the poster, there are seven flashes plus what looks to be either an angel-type figure or some sort of a bird. My first thought on the image was “phoenix rising,” but it will be fun to see what this image signifies, if anything. The flashes are supposedly somehow linked to Mr. Spock (Ethan Peck).