“More commonly known as Scotty, Lt. Commander Scott was the chief engineer for the starship Enterprise‘s five-year mission. This 1:6-scale figure re-creates this iconic character in exquisite detail. Standing approximately twelve inches tall, every element, from his 23rd century tunic to his custom black boots, is authentically reproduced. The original portrait sculpt of James Doohan as Scotty has an authentic, hand-painted likeness.”

Here are the hands included with the Scotty figure:

“This fine collectible figure is a perfect rendition of everyone’s favorite ‘miracle worker’ and a great addition to your Star Trek 1:6-scale figure collection.” 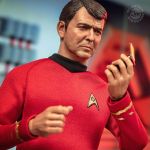 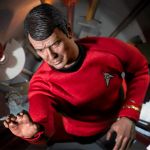 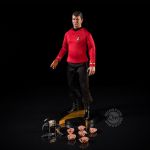