There will be a new look for Chancellor L’Rell (Mary Chieffo) in Season Two of Star Trek: Discovery.

In the newest photo of L’Rell, the formidable Klingon female has hair and is wearing a dress.

Chieffo explained why there was a change in her look for Season Two. “That is a really exciting addition that has been made and is inspired by Glenn Hetrick, who is our designer and a huge Trek fan himself,” she said. “He was inspired by season six, episode twenty-three of The Next Generation (Rightful Heir.) There is a reference when Kahless is brought back as a clone [and he says that] the way he proves himself is [telling] the story of how he cut off a lock of his hair and dipped it into a volcano and made the first bat’leth, with which he killed Molor, the terrible tyrant who was running Qo’noS at the time.”

Shaving their heads is something the Klingons do in wartime, according to Chieffo. The addition of hair means that the Klingons are now at peace, not war.

It also appears that L’Rell has had her scars removed, and her chin looks a little less sharp and more rounded.

Have a look at both images and compare them yourself. Click on thumbnails to enlarge. 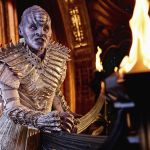 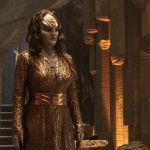