Three Star Trek comics will be released in December 2018 by IDW Publishing. The comics include Star Trek vs. Transformers #4, Star Trek: The Next Generation: Terra Incognita #6, and Star Trek: New Visions: Vol. 8.

The synopsis for Star Trek vs. Transformers #4 is as follows: “With the Enterprise disabled by the Klingon-Decepticon alliance, things look dire for Spock, Optimus Prime, and the landing team. But with the Autobots’ help, can Captain Kirk come up with a solution to save the day from a massive Cybertronian threat?”

This issue was written by John Barber and Mike Johnson, and features art and a cover by Philip Murphy. The thirty-two page issue will cost $3.99.

In Star Trek: The Next Generation: Terra Incognita #6, “the latest installment of The Next Generation Mirror Universe saga comes to a twisted conclusion as Mirror Barclay unleashes his fiendish plan on Captain Jean-Luc Picard and the crew of the U.S.S. Enterprise-D!”

Written by Scott and David Tipton, and featuring art by Angel Hernandez and a cover by Tony Shasteen, the thirty-two page issue will cost $3.99. 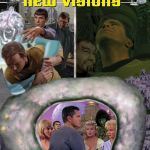 Star Trek: New Visions: Vol. 8 is the third December offering from IDW Publishing. In this issue, written by and with photo manipulation by John Byrne, there are three stories, including The Enemy of My Enemy, An Unexpected Yesterday, and a reinterpretation and adaptation of the TV episode The Cage.”

One hundred and twenty-eight pages in length, New Visions: Vol. 8 will cost $17.99