Behind The Scenes of Stewart’s New Trek Series 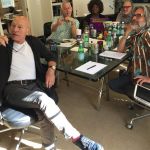 Fans of Sir Patrick Stewart are looking forward to his new series, which will be set after Star Trek: Nemesis.

Stewart recently tweeted out a picture of the writer’s room, showing those involved with creating and writing the new series hard at work. Click on the thumbnail to the left to see the full-sized photo.

The new Picard series is expected to premiere next year.

Coutts On Landing The Detmer Role