The actor who will play Spock in Star Trek: Discovery is Ethan Peck.

“Through fifty-two years of television and film, a parallel universe and a mirror universe, Mr. Spock remains the only member of the original bridge crew to span every era of Star Trek,” said Alex Kurtzman. “The great Leonard Nimoy, then the brilliant Zachary Quinto, brought incomparable humanity to a character forever torn between logic and emotion. We searched for months for an actor who would, like them, bring his own interpretation to the role. An actor who would, like them, effortlessly embody Spock’s greatest qualities, beyond obvious logic: empathy, intuition, compassion, confusion and yearning. Ethan Peck walked into the room inhabiting all of these qualities, aware of his daunting responsibility to Leonard, Zack and the fans, and ready to confront the challenge in the service of protecting and expanding on Spock’s legacy. In that spirit, we’re thrilled to welcome him to the family.” 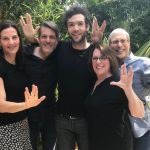 Adam Nimoy posted a photo of Peck, standing with Nimoy, Terry Farrell, Julie Nimoy, and David Knight. Click on the thumbnail to see the full-sized photo.

“Thanks to the Nimoy family for your open arms, warm welcome, smiling curiosity and support, for making me feel worthy, as I embrace and take into my heart the iconic half alien we know as Mr. Spock,” said Peck. “It is an incomparable honor.”

Peck is the grandson of Hollywood star Gregory Peck. The thirty-two-year-old actor began acting when only nine years old, and has been seen in shows such as 10 Things I Hate About You, Gossip Girl, That 70’s show, I Ship It, Madam Secretary, and That ’70s Show.