Two new pictures from the second season of Star Trek: Discovery have been released by Entertainment Weekly in their San Diego Comic-Con issue of their magazine. Note: mild spoilers. 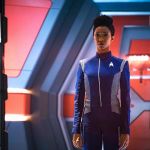 One of the pictures features Michael Burnham on the USS Enterprise. She is entering a room from the corridor.

In the magazine, Sonequa Martin-Green is interviewed, and she said that the second season would be “digging into family,” with “questions…raised [and] some [of those questions will be] answered.” 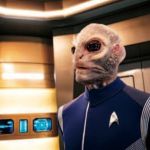 The second picture features an alien Saurian. “His name is Linus,” said Martin-Green, “and he’s a Saurian. We’ve seen his species before, also I’m excited to see if [fans] can pinpoint just exactly where.” Of course, fans will remember where they first saw a Saurian, in one of the Trek movies. Do you remember which one?

Gurira To Be In Next Trek Movie?