Today was a busy day at the San Diego Comic-Con, and there was plenty of news for fans waiting for the return of Discovery, which will take place in January 2019 according to Alex Kurtzman. Note that there are spoilers below.

First, have a look at the Star Trek: Discovery Season Two Premiere first look trailer, which features plenty of action and a new Captain for the USS Discovery. Expect the show to return in early 2019.

Also expect to see some new characters for the second season, including several from Trek’s past. “I can tell you that yes, you will be seeing Spock this season,” said Kurtzman, during the Discovery Hall H panel earlier today.

Captain Christopher Pike (Anson Mount) will also be seen this season, and Rebecca Romijn will take on the role of Number One.

Fans of Lorca and Culber had hope rekindled after Kurtzman spoke today. When asked if Lorca (Jason Isaacs) would return (the normal universe version), Kurtzman said, “maybe.” Of course, no matter how he answered the question, some would believe him and others would not. The producers of Star Trek: Discovery like to be secretive.

As for Culber, he’s returning, said Wilson Cruz. “I’m not here just to say hello,” he said. “I’ll be back. We’re not telling you how. But we’re still reveling in the fact that this gay love has saved the universe. All the universes.”

But what about the Klingons? Are they done after the events of Season One? Not hardly. L’Rell is “trying to be the best chancellor she can be of this patriarchal Klingon empire,” said Mary Chieffo. “She’s doing her best to uphold T’Kuvma’s mission.”

We’ve not seen that last of Ash Tyler either. “He wants to see Burnham again,” said Shazad Latif, “but he’s got to find a way back. He’s going to struggle to find his place in the universe.” 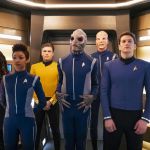 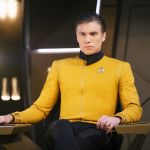 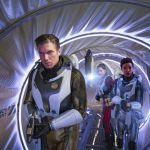 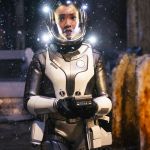 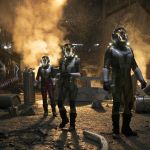 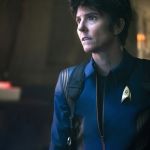 Fans will not have to wait until January to get some Star Trek: Discovery. Kurtzman announced the plan for Star Trek: Short Treks at today’s panel.

According to CBS‘s press release, “The four Short Treks episodes will roll out monthly beginning this fall, and will be stand-alone stories, each running approximately ten to fifteen minutes. Each short will be an opportunity for deeper storytelling and exploration of key characters and themes which fit into Star Trek: Discovery and the expanding Star Trek universe.

“Rainn Wilson will return to play Harry Mudd in a short he will also direct, and Aldis Hodge will star in another as Craft, a man who finds himself the only human on board a deserted ship. Additional episodes include a deep dive into Saru’s (Doug Jones) backstory as the first Kelpien to join Starfleet, and Tilly’s (Mary Wiseman) journey aboard the USS Discovery and her friendship with an unlikely partner.

“‘There is no shortage of compelling stories to tell in the Star Trek universe that inspire, entertain, and either challenge our preconceived ideas or affirm long held beliefs, and we are excited to broaden the universe already with Short Treks,’ said Kurtzman. ‘Each episode will deliver closed-ended stories while revealing clues about what’s to come on in future Star Trek: Discovery episodes. They’ll also introduce audiences to new characters who may inhabit the larger world of Star Trek.'”