Fans attending last night’s San Diego Comic-Con were the first to see the newest 1:6 scale Star Trek figure; one of the USS Shenzhou Captain Phillipa Georgiou. In addition, other various Star Trek figures were on display. 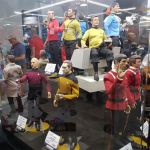 Your TrekToday reporter will finish up a two-day (non-Trek) convention tomorrow in the city, so any Discovery news will be posted around 7-8 PM ET.